Zoom Goes Public and Jacks Up the A/V on Video Conferencing | CRM.org

Are you talking to me?

In an age of increasing chatbots, canned responses, blast emails, and GIF’d up texts thumbed off on the fly, there’s something to be said for that old-school method of communication: talking.

The exchange of ideas and the collaborative act of problem-solving requires looking your partners in the eyes, hearing their voices, and picking up on the many subtle human gestural and expressive signals.

Except there’s one problem for a return to conversational basics: getting everyone in the same room together.

Hence the evolution from cameras to microphones, web connectivity, and ultimately: Zoom, one of today’s leading providers of remote-video meetings, web conferencing, screen sharing and more.

The video conferencing market is huge and only growing, set to be a $20 Billion industry by the year 2024. And for good reasons:

In a nutshell, Zoom makes it easy to set up groups, initiate audio or video meetings, chat alongside meetings, and record, transcribe and archive meetings for future searchable purposes.

In other words, it’s one serious tool for a mobile, remote and globalized working world.

A typical Zoom meeting might look like this: A couple of staff are sitting in a boardroom, on a wall-mounted screen are several windows each opened to another meeting participant, one of whom is perhaps in an office on the other coast, another is participating off their laptop at home, and a third is plugged in via their mobile device while sitting on a train.

With Zoom, everyone can count on sharp video, and more importantly, super clear audio, no matter how many people are actually in on the same meeting. In fact, Zoom meetings can handle up to 1,000 participants, along with 10,000 extra viewers, with nearly 50 people showing up on live video feeds.

Zoom syncs with calendar apps like Outlook, Gmail and iCal. Say you jot down a meeting in your calendar, Zoom will automatically register that event, preventing you from double booking. 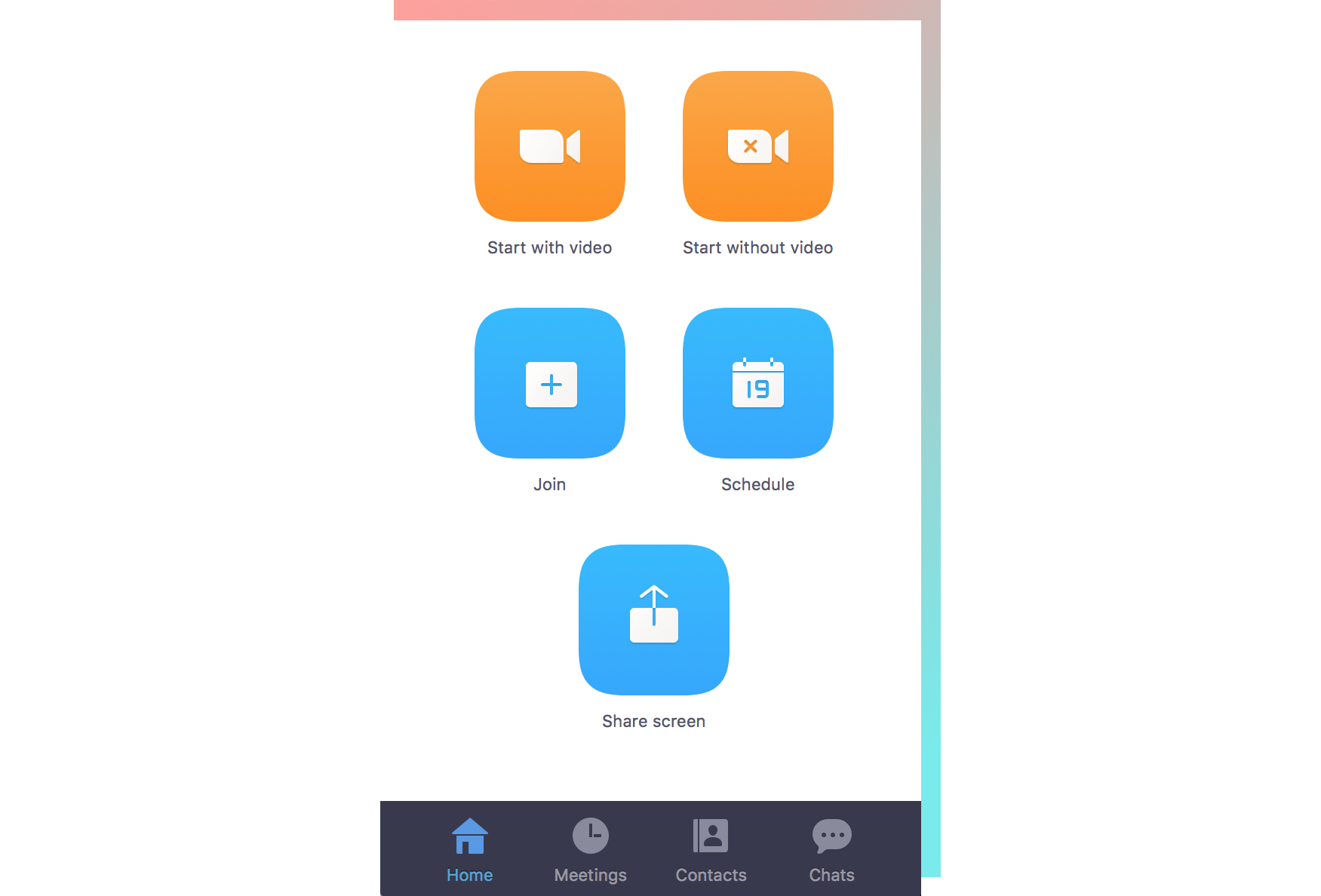 During meetings, you can continue to send chat messages, either to everyone within the meeting group or privately to specific attendees. You can also share documents, audio and video files, even screenshots during a meeting.

Other meeting features include being able to put attendees on hold, like giving them a “time out” in a virtual waiting room. Similarly, if attendees arrive for a meeting too early, they will also be in the waiting room.

During, or after meetings, you can set up Q&A-style polls which attendees can answer by typing, so as to not disturb the speaking. Likewise, there is a ‘hand raising’ option if you want to cut in, but without rudely interrupting.

You can also send code-snippets, which is great for collaborating programmers, or CRM files for contacts and other data, which is a serious plus for sales.

Finally, meetings can be recorded with a simple click, with all the audio transcribed into text. Both audio/video and texts can be saved in the cloud or downloaded onto local storage.

Chats, or messaging, works closely within meetings but could also be used as a stand-alone feature.

You can set up chat groups based on collectives like team (sales, support), topic (product brainstorming, team-building activities), or project (overhaul homepage, finish the “Penske” file). Groups can be public for anyone to join, or private by invite only. Even folks external to an enterprise can get invitations.

Chats also display everyone’s status (as will meetings too), which can be derived from one’s synced calendar details. For example, if your calendar has you scheduled for a meeting at a client’s office, or has you down for a personal day, it will say so as your status. Similarly, your status will relay if you’re completely offline or accessing Zoom from mobile. 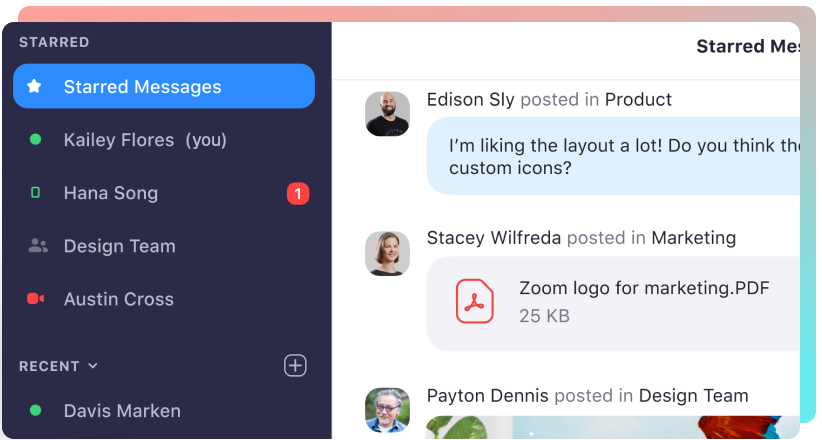 Finally, meetings can be initiated directly from chatting and messaging. Say you’re in a group chat and want to migrate over to some classic tÃªte-Ã -tÃªte style conversation, one click will get it all set up in seconds.

An old-school speakerphone plunked down in the middle of a boardroom table can still get the job done, but Zoom’s phone features are certainly an upgrade.

This phone app facilitates not only making calls but leaving and managing voicemail messages, as well as handling multi-party phone conferences. It can function off of standard cellular phone channels, data or wifi connections.

You can set call routing parameters so that if one recipient isn’t there to pick up, the call can go to the next appropriate person. There’s also an interactive voice response (IVR) feature, which automates responses for general inquiry purposes, freeing up time for receptionists from more basic triage work.

Of course, calls can be recorded, and voicemails can be transcribed. Finally, the phone app works directly with your Zoom contact list.

Hosting a webinar is already stressful, let alone worrying about whether or not it will stream well. Zoom offers a popular webinar solution that users can feel confident about.

The feature allows users to host events with up to 100 video participants and an impressive 10,000+ attendee limit. But that's not all! Zoom hosts your webinar and helps you prepare for it too. Easy-to-use and flexible registration forms plus CRM integration help get the message out to all of your contacts. Intuitive host controls ensure any pre-webinar nightmares won't come true.

Zoom video webinars helps you get your story across to people around the world on a platform of their choosing, including desktops, laptops, mobile devices, and conference rooms. 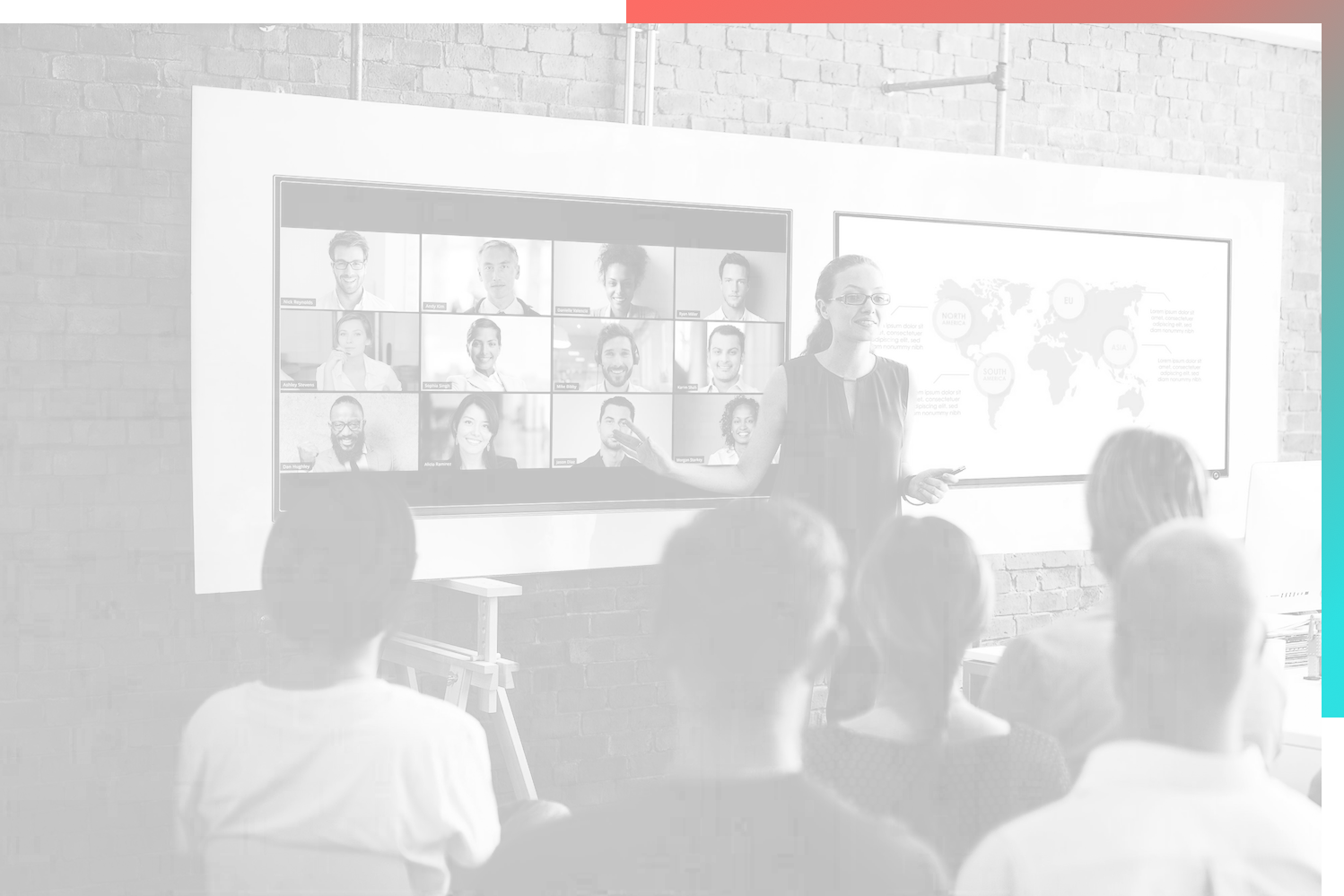 Zoom in on the customer first

CEO Eric Yuan was the founding engineer of another video conferencing company that was quickly scooped up—along with Yuan himself for a hefty salary—by tech heavyweight Cisco Systems in 2007.

Yuan became disenchanted, however. He felt the Cisco approach was straying too far from his vision of a customer-first product; in his words: “I did not see happy customers.” He wanted to develop a video-conferencing product that was constantly being improved with the collaborative input from the actual people using it.

The CEO’s due diligence continues to pay off, as the company has reportedly made $330 million in revenue in the year ending January 31, 2019. According to Tech Crunch, that’s a 2x increase year-over-year, with a gross profit of $269.5 million. Zoom has also very recently filed to go public: now may be the time to climb onto the the back of this proven-to-be-profitable tech unicorn.

This success is easily attributed to Zoom’s dedication to listening to their user base, which is partly achieved by using a customer-advisory board, as well as other AI and automated tools to improve engagement.

This two-way loyalty is one reason Zoom’s got such a large and satisfied customer base, which makes sense for a company dedicated to better, and more human communication.