VWO’s 5-Step Conversions and the Goals That Bind Them | CRM.org

VWO’s 5-Step Conversions and the Goals That Bind Them

Once upon a time, revenue was the most important fundamental metric for judging company value. “If it’s making money, it’s gotta be worth money, right?” But during the wild west of the late 1990s, most tech companies had zero revenue to speak of, let alone profit.

So, speculators came up with new metrics: “If it’s got a lot of traffic, it’s gonna make money one day, right?” Well… Wrong. The dot.com bubble saw many record-breaking IPOs which would crash once investors got a good look under the hood and realized these companies were basically running on empty.

Traffic alone will drive you nowhere

There’s no denying that when it comes to e-commerce, traffic is still important. Traffic alone isn’t the solution—companies need to drive that traffic towards revenue. It’s called the sales funnel, and when a website visitor moves all the way down that funnel, that’s a successful conversion.

Imagine a brick-n-mortar shop. The first stage of the funnel is when someone walks in off the street. Next, they’re drawn to a product, maybe they pick it up and ask a salesperson some questions. Moving on, they bring the product to the cash, where hopefully, they don’t change their minds while waiting in line. The final stage is the payment—a successful conversion.

Online business work similarly: Visit the site, view a product, add it to the cart, enter payment and shipping info, click ‘buy!’ It’s a funnel because at every stage, people “drop out” and therefore the scope of potential customers narrows as you reach the conversion end-point.

Conversion rate optimization, or CRO, is a collection of tools and techniques to help convert visitors to customers and keep that funnel from narrowing.

It’s about “rapid experimentation across the marketing funnel” (sometimes called growth hacking). VWO is one such CRO platform used by heavies like Ubisoft, eBay, and Target.

VWO is the first product from Wingify, an Indian company founded in 2009 by millennial renaissance figure Paras Chopra (he has a background in computational biology, machine learning, online marketing, and web technologies). Chopra is so passionate about CRO technology that he uses both the Wingify and VWO sites as content repositories for his and his team’s copious writing on the subject.

VWO (formerly Visual Website Optimizer) lets users follow website visitors through the funnel and to see where people drop out. The platform helps companies come up with theories as to why people drop out at a certain point, and the ability to test those theories. Finally, VWO makes it easy to implement changes based on the results of those tests.

This might sound like a simple description, and that is half the point. CRO involves a lot of different metrics and analytics, variable testing parameters, and a whole array of targeted techniques to win back failed conversions. In other words, CRO is a complicated beast.

VWO tames that beast. In the words of Chopra, he hopes to help people implement CRO without them “requiring a degree in rocket science.”

They do this with a five-tier structure that’s laid out on their pretty straightforward dashboard.

From the get-go, one is encouraged to consider broader goals—that is, not just to “get more clicks” or even “sell more stuff,” but something more big picture.

It’s actually defining what “success” means, not just blurting out: “I wanna be successful!”

Track breaks down basic site metrics using funnels and drop-off points as a first step to reach those goals. VWO keeps these goals front and center through every stage of the CRO process. 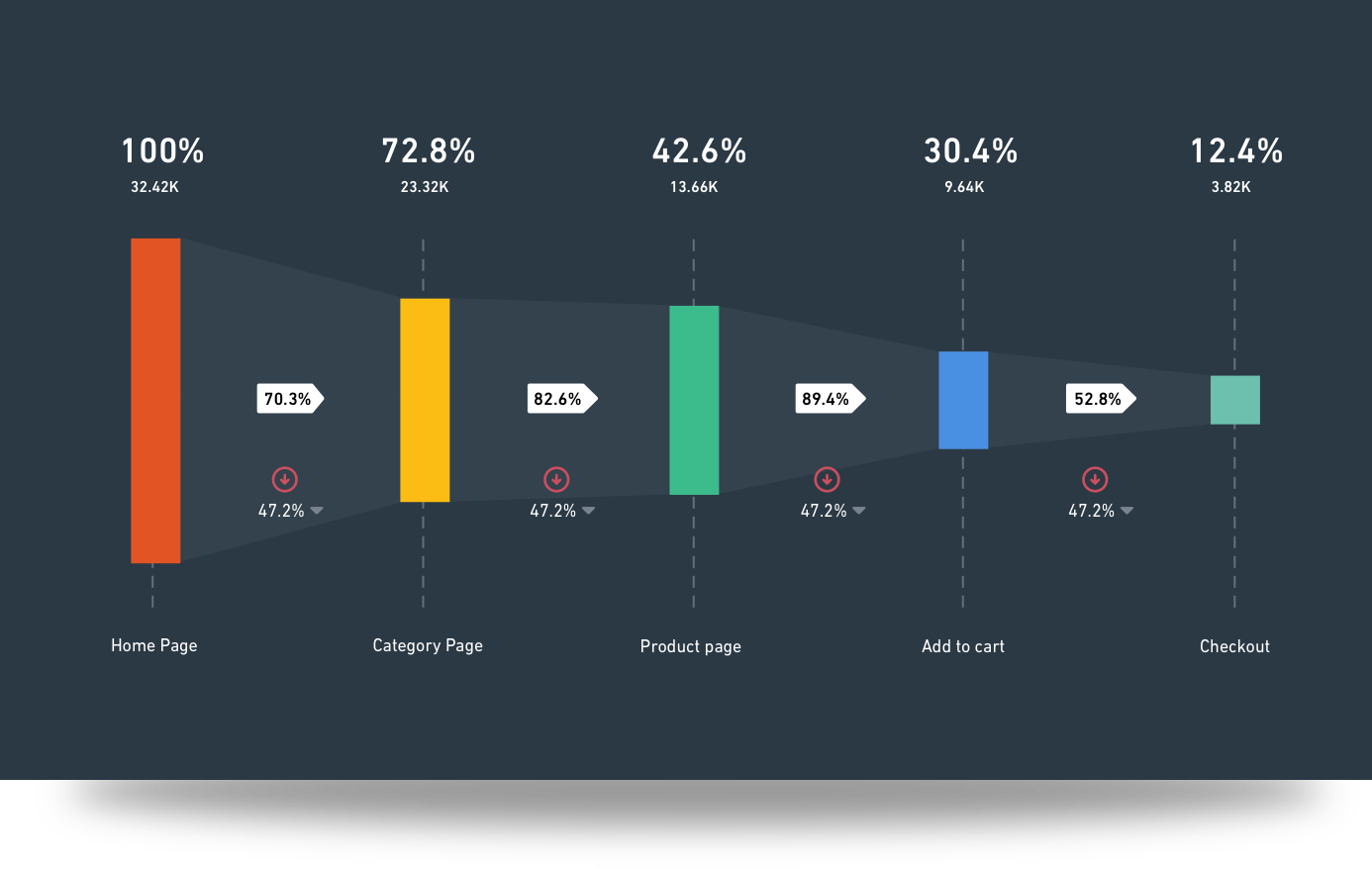 Analyze includes great features that really live up to the software’s “visual” promise. Heatmaps and scroll maps make it glaringly obvious where people are clicking, how deep into a site their viewing, and what is being ignored. One can also record a visitor’s journey, watching their mouse movement, where they hover, pause, and click. 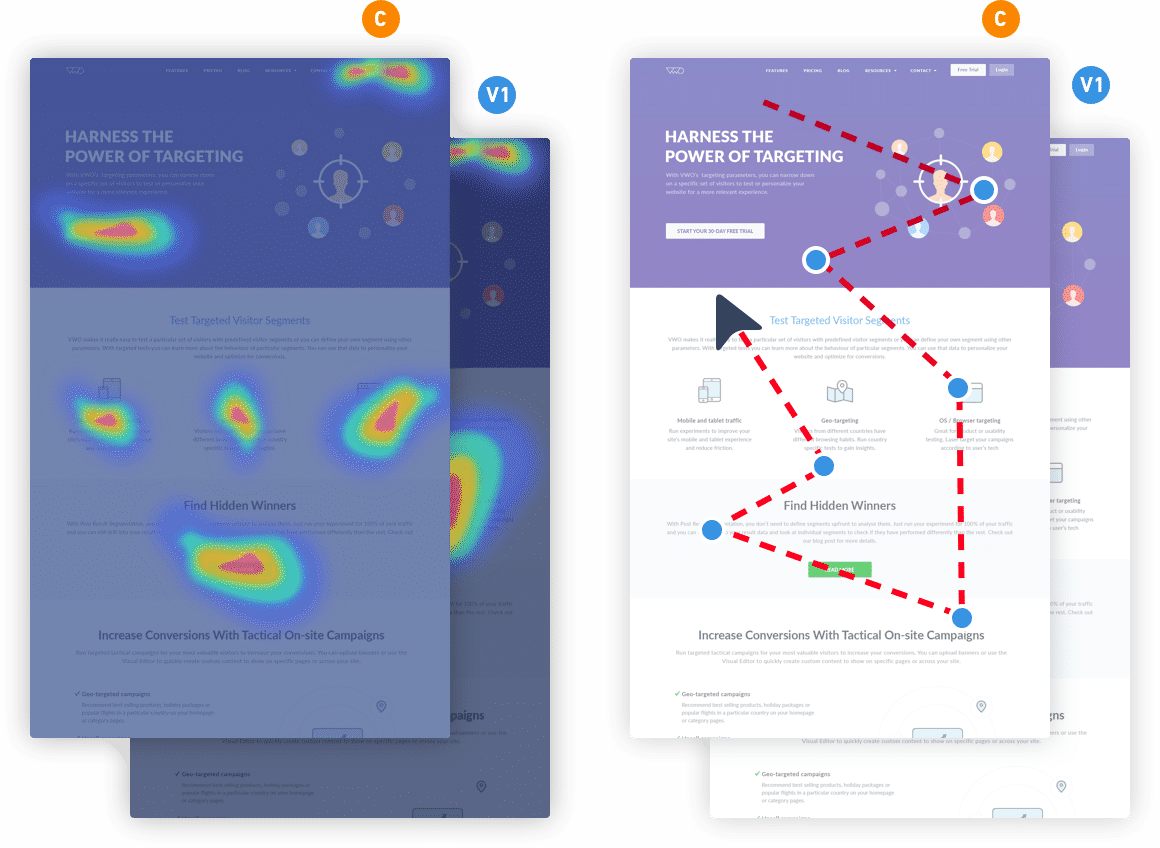 Plan allows the user to stick observations right on the site. It’s like a post-it note attached to a red CTA button with a comment like “why is nobody clicking me?” This leads to hypothesizing, which is probably one of the coolest features of VWO. It works like this:

Test is the real nuts ‘n’ bolts of VWO. Since there is plenty of other A/B testing software out there (some freemium), VWO needed to make theirs worth the premium subscription fees (from $50/month for a small startup to $1,000/month for an enterprise).

VWO offers several testing variances, from standard A/B to split URLs and even a multivariate option to run hundreds of live simultaneous variations. The variety and sophistication of the testing is only matched by the simplicity of their WYSIWYG visual editor, so setting up tests requires no “rocket science” (there is also an advanced code editor). 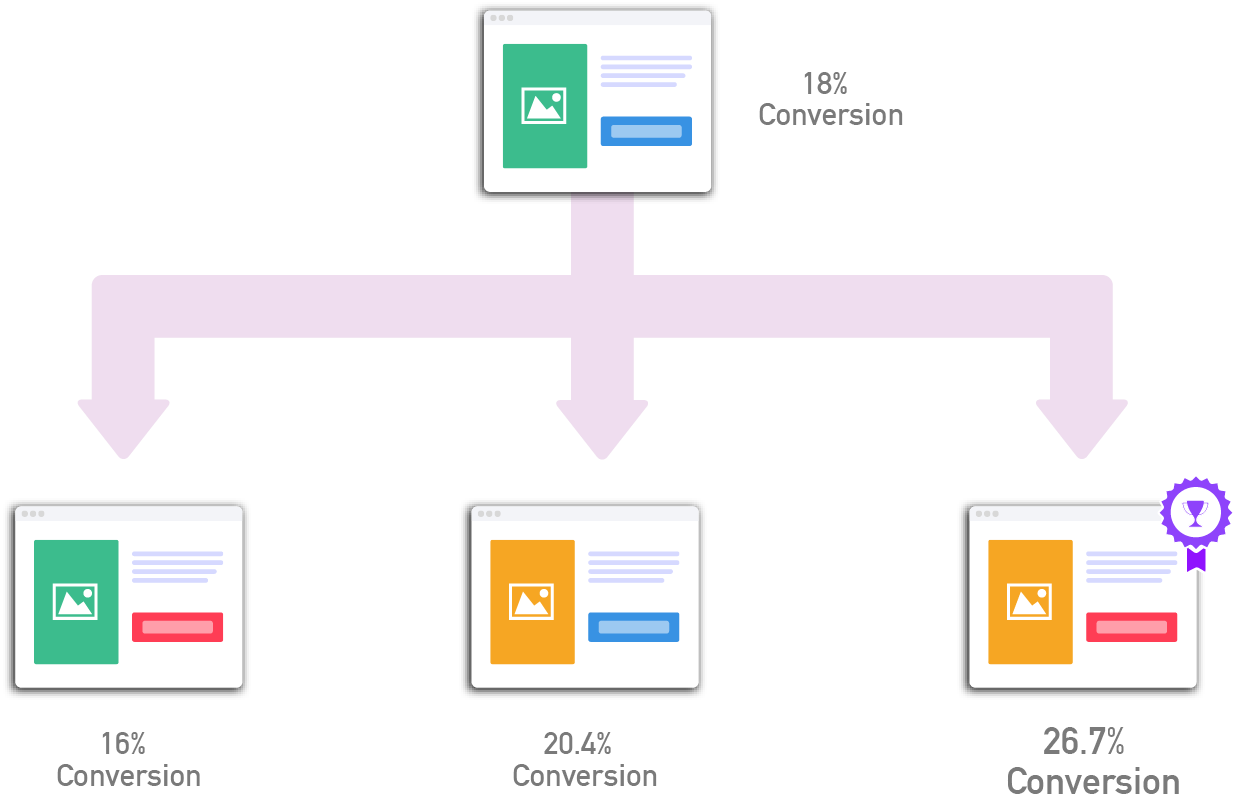 Target allows for a personalized implementation of changes to reach specific audiences. The hope is to deliver people more relevant content that will help move them down the funnel and answer the ultimate CTA, like “sign up here,” or “buy now.”

CRO emerged as a response to the dot.com bubble. The digital revolution was a paradigm shift that brought insanely high IPOs. One explanation is that companies were overvalued due to not-yet-fully-understood metrics like ‘traffic’ taken out of a larger context.

What’s more, the explosive share prices were accepted as accurate because of dominant theories like Rational Choice and Efficient Market Hypothesis. These painted a picture of people always making thorough risk-reward calculations in every choice they made, and therefore, market prices should accurately reflect what a company is worth.

Call it having an extremely optimistic view of people’s rationality, or irrational exuberance. Whatever you call it, the end-game was the same: Crash!

People could have heeded economist Herbert Simon. He claimed people did not bother with thorough calculations for every choice, but instead relied on biases, simplified contexts, or they made just good enough choices that were convenient.

He believed these were not optimal choices, but satisficing ones (Simon’s portmanteau of satisfactory & sufficing).

Arguably, choosing to consider traffic alone as a valuation metric was not much more than a satisficing decision.

Which brings us back to Paras Chopra and his philosophy of big-picture goals.

Chopra uses Simon’s idea of satisficing decision-making in contrast to what he calls metathinking. It’s not deciding on a course of action that seems pretty good for now, but rather making a carefully outlined decision that aligns with long-term goals.

Or to put it another way, trying to increase website traffic, or simply push traffic towards checkout, is just a satisficing business plan. Traffic should be considered as one component in a larger picture, which is better understood using deeper metathinking.

The narrow-minded technique of ramming traffic down a funnel might convert visitors to one-time paying customers, but it’s like a brick-n-mortar shop which drags people in with flashy deals, leaving them feeling like they were nothing but the object of a cold transaction.

A Chopra metathinking approach to traffic would be to first decide, and clearly outline, what kind of relationship a company wants with their customer.

It’s about converting one-time buyers into loyal customers, or even volunteer brand ambassadors. In the concrete world, folks often pop into their favorite shops even if they aren’t planning on spending money. Sometimes they even bring friends.

Metathinking isn’t easy, it demands a lot of mental energy. VWO gives marketers that freedom and creativity to think big-picture goals because all the technical work has been streamlined in the software. For Chopra: “good marketing thrives on creativity,” and there are many creative ways to keep that funnel wide.