Software engineers are no exception. MinimaList, by Davetech Co., Ltd. is solid proof that the brevity and bluntness of the “less is more” mentality is as powerful as ever.

MinimaList is a to-do list making app, and not much more, but of course, that minimal description is fully intentional.

It's a smartphone SaaS for Apple iPhone and Google Android phones. The idea is an intuitive interface and simple functionality. The point is to find the simplest way to organize and get through your tasks.

Minimalist is up there with the best apps for simple to-do lists. Even Google Tasks gets a run for the money here. Minimalist will make you a pro task manager.

In today’s hyperactive society—where we’re constantly multitasking, where every chore must be navigated through thickets of distraction, where media and messaging bombard us from all sides, and where every event is saturated with data—having a to-do assistant like MinimaList is a breath of clean, undistracted and uncomplicated air.

Mies van der Rohe and his Bauhaus buddies understood that minimalism was both functional and beautiful—nay, that functionality was beauty. It helped guide people through the buildings they designed with minimal friction and near-zero wasted movements. 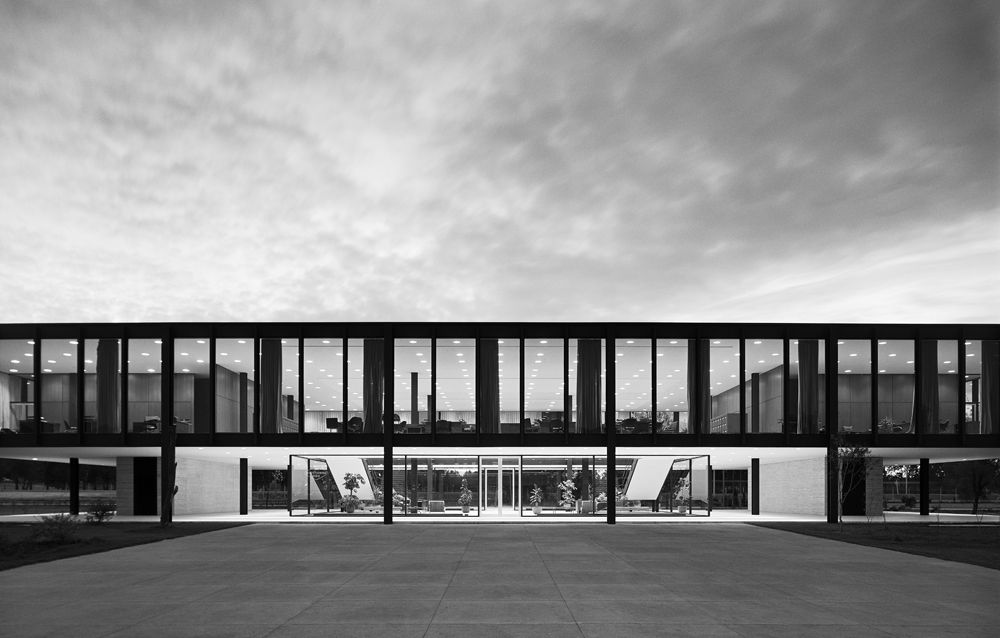 In other words, it got people to where they needed to go.

Likewise, MinimaList helps people do what they need to get done.

MinimaList is an iOS app designed for iPhones and iPads. There are also versions for Android, desktop as well as for Apple Watches.

The website has very little info there. Again this is part of Minimalist's style. Don't worry. They prompt you to download the app. Once you do and boot it up, the program explains itself.

The app icon on the homepage is a white square and a black tick. You open it to an off-white background and a clean, lean, sans-serif font. It displays the app's name, and the "less is more" motto beneath it.

Right away, you're given instructions on how to begin: a series of swipes and taps with different actions. In no time, you're building simple lists and working your way through them. 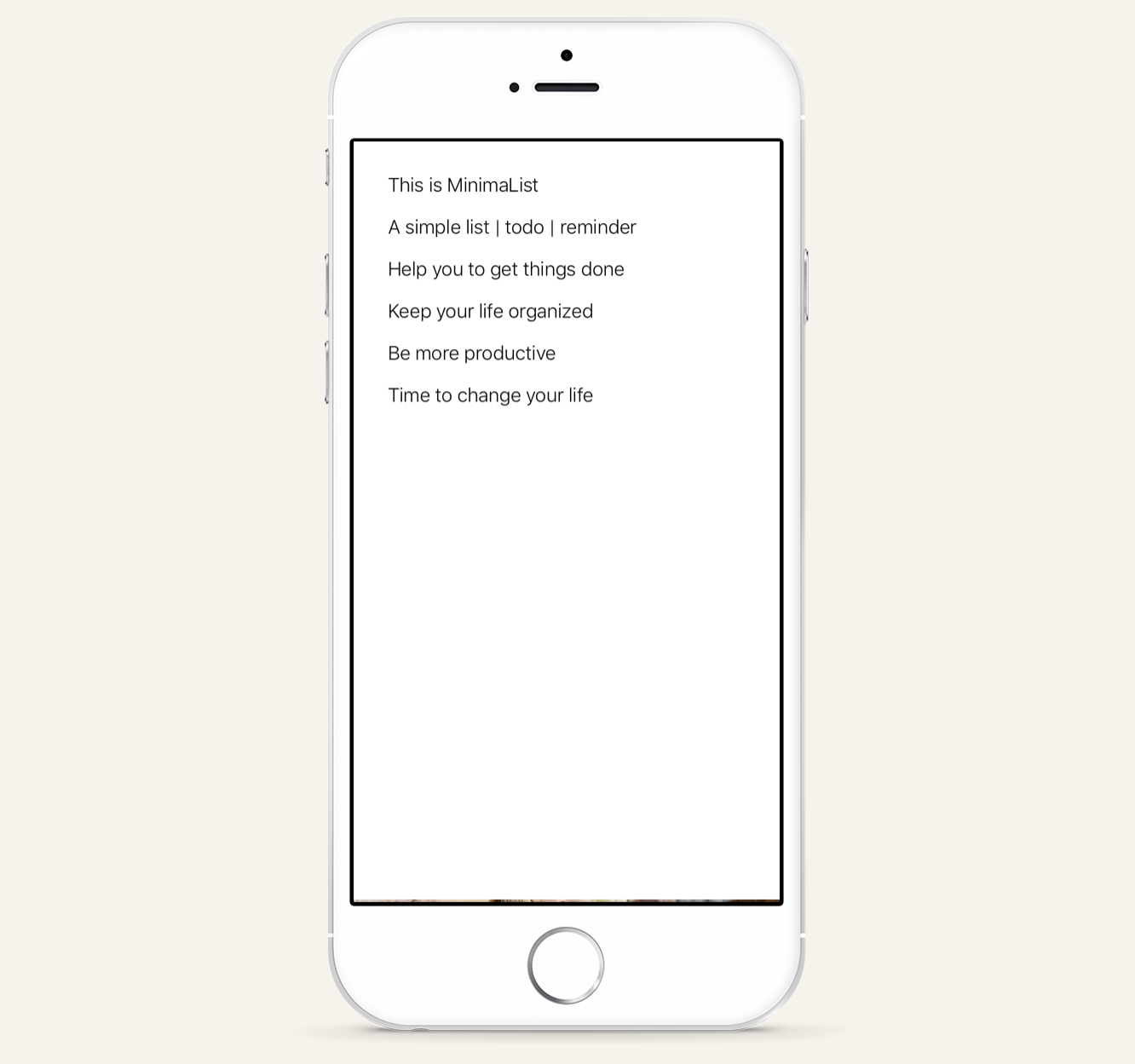 Pulling the screen down adds a new task. The name of a to-do item—like "clean yard"—can be as many characters or line breaks as you like. This is helpful because one cannot add extra notes to tasks.

There is a 'timer' icon at the bottom right corner. It sets the day and time to receive alerts. You can choose a 'repeat' option like daily, weekly, or monthly. There are amazing sounds that go with notifications.

When typing the name of a task, you can include any words related to a time or day. Then MinimaList intuitively detects this. For example, say you type in: "Call Grandma Friday," the item will show up with the coming Friday's date. The app will automatically ask if you want a reminder and when.

And if you're not ready to fulfill that task, you can use a reminder auto snooze function.

At any point when viewing a list, you can swipe the item right to mark it as completed, or swipe it left to delete it. Double tapping the item brings up its details so you can make changes to the name or the scheduled alerts.

When using a simple to-do list-making app, it's important to not complicate things. You might make a shopping list on the desktop version. Then you plan on checking it on your smartphone at the shops.

Minimalist handles syncing well. They use great cloud syncing technology. Any new lists or updates you make on any device gets automatically synced in real-time to other devices.

Likewise, with Minimalist, you can work on teams. Friends or work colleagues can share lists. All you need is a share link to open in Safari. It also syncs with Apple Calendar.

Tapping once on an item from a list brings up the focus mode. This is a clocking system that helps you keep distractions at bay to complete the task. There are three versions of clocking.

There is the Pomodoro timer. This is based on a time-management technique. It counts 25-minute intervals for working. A 5-minute break follows. You can change these durations in the settings.

For some, the Pomodoro timers may seem a bit too structured. This simple app has other timer settings that are more basic. Minimalist also offers a stopwatch and a countdown timer option. 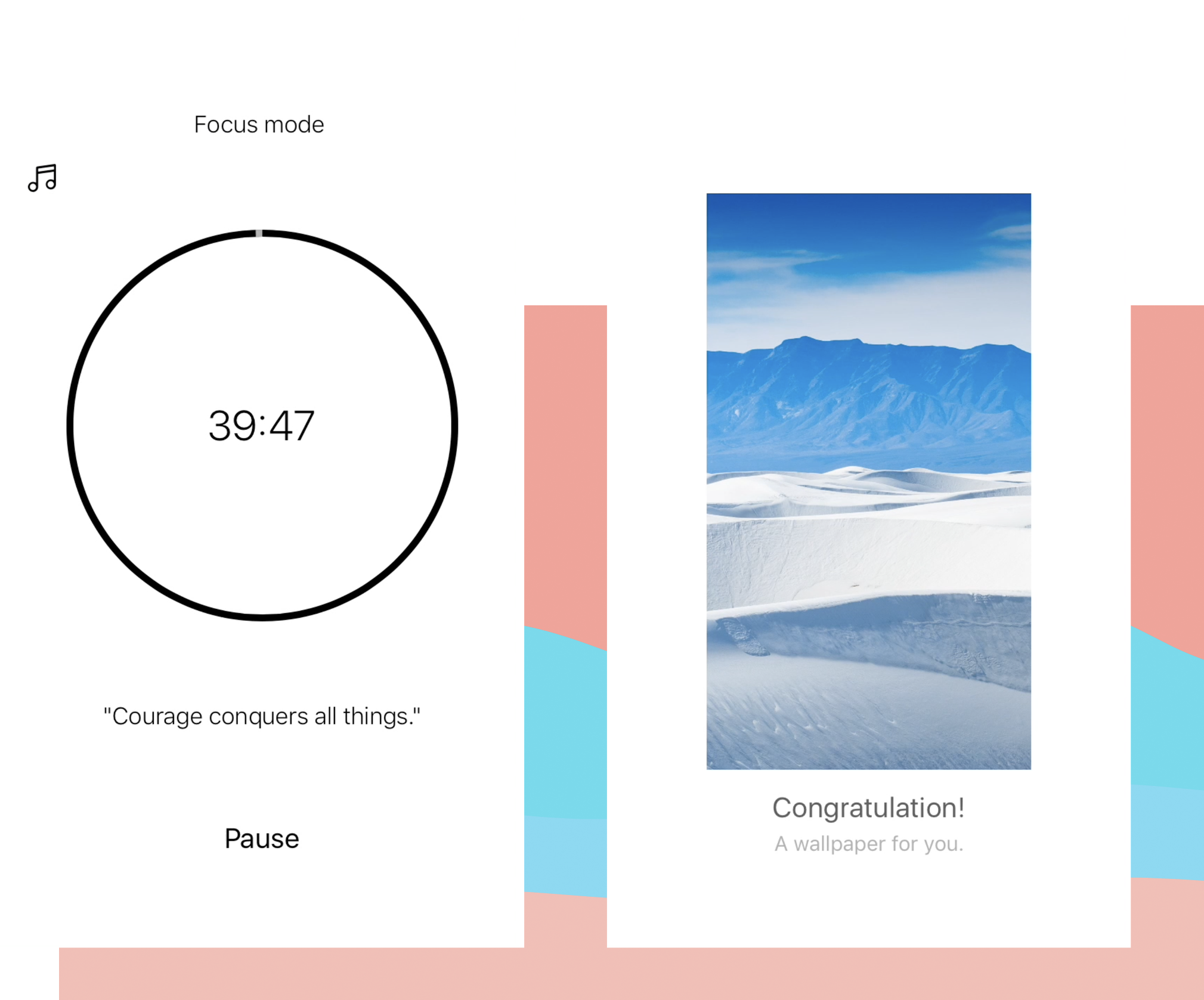 Swiping up from the main list page displays tasks that you've started. They call these tasks "focused." It shows completed tasks too. From there, the 'ellipsis' icon at the bottom right corner brings up a Stats page. This page displays all the tasks completed as a bar graph by either week or year.

Designed for Apple devices, MinimaList works intuitively with Siri. You can prompt Siri with a simple statement. For example: "Add 'buy dog food' to [name of list] on MinimaList." Then you're prompted with a confirmation screen. It lets you know Minimalist has added the item.

The freemium version of MinimaList is perfect for organizing personal day-to-day tasks. It has fewer functions but is still very useful.

That's not all. The app makes for a great productive work tool as well. Premium features let you sync lists across multiple devices, up to the cloud, or with the calendar app. For collaboration purposes, there is list sharing capabilities with other MinimaList users.

When it comes to notifications, premium unlocks location-based reminders. These work alongside the standard time-based ones. There's also a feature called Today Widget, which is like a daily sum up of all to-do tasks for the day.

Other extras you get with premium include the TouchID and FaceID functionality. This gets you added protection and security.

There's also Voice Input. It works within the app to save your fingers the effort of typing. It is important to note that Voice Input works alongside Siri in the free version.

The default colors, fonts, and sounds of MinimaList are perfect for most people who dig this app for its minimalist aesthetic. But you can still make changes. The premium offers several customizable options, including background themes, fonts, and ringtones.

What will it cost ya?

The cost of the premium tier is pretty reasonable at $0.49 per month. You can also pay $5.99 per year starting with a 7-day trial, and a "lifetime VIP" price at $8.49. Subscriptions are charged to your credit card. It seems well worth the small change. Especially if you're using MinimaList for work and collaborating with colleagues.

If you're not sure about the basic free version or the all-in-one premium version, don't worry. Minimalist Pro offers a free trial version. Take it for a spin and see if the added features are worth the cost. Just know that if you decide to purchase the premium version during the free trial period, you will forfeit any unused free time.

Minimalist premium will become one of your favorite apps if you are serious about list-making and task-management.

It should be noted that while the app uses the word "premium" on the App Store, it's called "MinimaList Pro."

What the folks are saying

A quick glance at some reviews of Minimalist speaks volumes. Some say it is the perfect mix between complicated task-management and oversimple list-making. Others adore its look and feel, praising the simple aesthetics and intuitive functionality. Other personal reviews have expressed their newfound love of all things minimalism.

It is a bit difficult to find any negative reviews about Minimalist. But, when comments do point out shortfalls, the Minimalist developers always respond. That's dedication to a great user experience.

"Less is more." The motto comes from Ludwig Mies van der Rohe. He was a modernist architect and the final director of the Bauhaus school of art. Nearly a century later, its brief, blunt but powerful message still influences artists, designers, architects, and engineers.

Software engineers are no exception. MinimaList, by Davetech Co. Ltd., is solid proof that the brevity and bluntness of the "less is more" mentality is as powerful as ever. In case you have not heard of DaveTech, they have many other cool apps. They have a Habit Tracker app and a currency converter. Davetech also offe4rs some cool fonts and photo filter apps.

Clutter is an enemy of productivity as it can disturb one's peace of mind. Just look at the massive appeal of the KonMari "de-cluttering" phenomenon. Or check out the popular science theories like Daniel J. Levitin's The Organized Mind: Thinking Straight in the Age of Information Overload.

Likewise, Ludwig Mies van der Rohe understood that efficiency and productivity can still have a sense of artistry.

In today's hyperactive society, we're constantly multitasking. It seems that every chore must be navigated through thickets of distraction. Where media and messaging bombard us from all sides. Where every event is saturated with data.

Having a to-do assistant like MinimaList is a breath of clean, undistracted, and uncomplicated air.

Mies van der Rohe and his Bauhaus buddies understood that minimalism was both functional and beautiful. That functionality was beauty. It helped guide people through the buildings they designed with minimal friction and near-zero wasted movements.

In other words, it got people to where they needed to go.

Likewise, Ludwig Mies van der Rohe understood that efficiency and productivity need not be built without a sense of artistry.

MinimaList combines the principles of calming aesthetics and simple functionality. A “to-do list” app may not seem like all that much to talk about. Maybe that’s the point: less to talk about, more getting things done, one task at a time.

Miro Takes Whiteboards Into the 2020s