Brainstorm. Get good ideas. Put them in place and prosper.

It can improve creativity. Teams can collaborate and perform better. Individual users can visualize concepts and establish connections between ideas.

Coggle is one major mind mapping tool. The web application is designed for teams. It produces hierarchical documents to help users visualize and share ideas.

Built as an alternative to traditional note-taking, Coggle represents concepts graphically. It is often described as a visual thinking tool.

The app uses drag and drop branching tree diagrams. Information is converted into an organized, memorable layout. One that simulates how the brain works.

From there, you can generate, analyze, and memorize ideas. Understand complex information too. 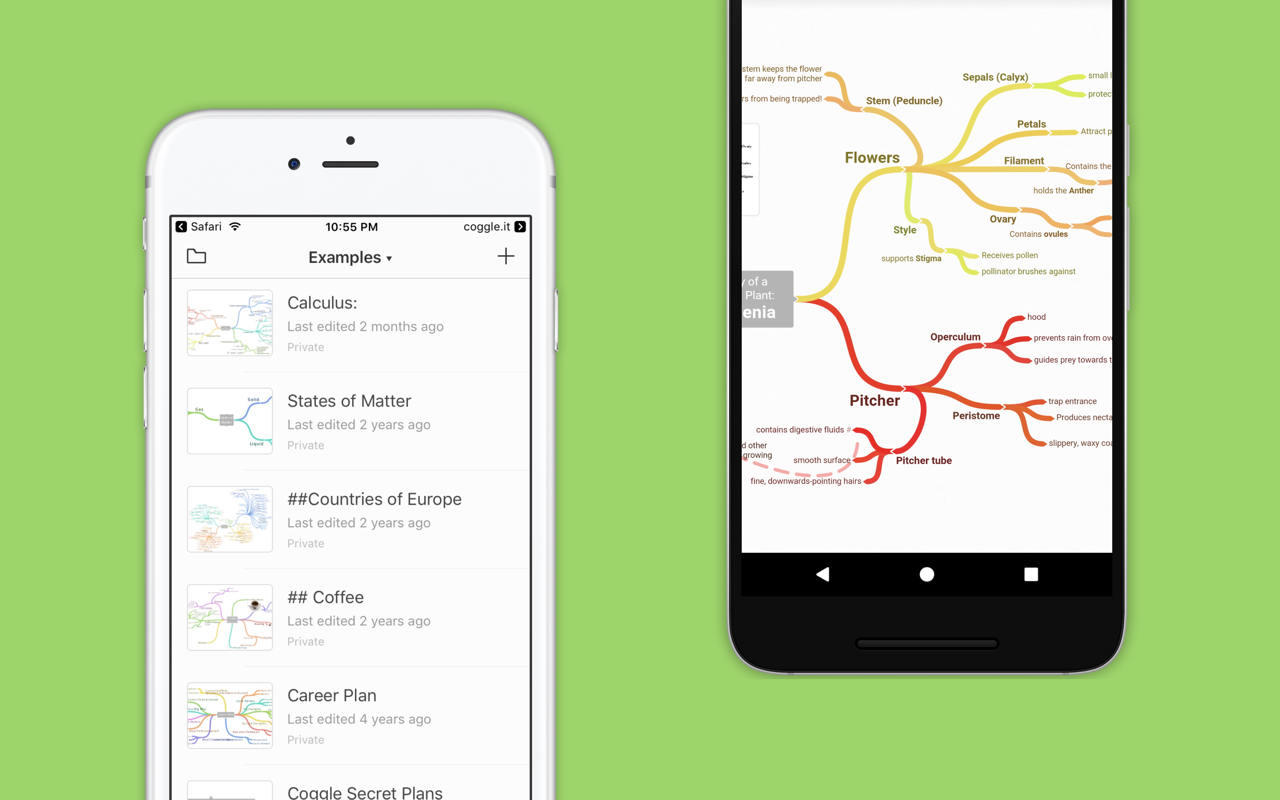 A Coggle is born

The trio came up with their golden app concept while working on an unrelated research project. For the record, it was building autonomous underwater vehicles.

Crosby, Ogborne, and Pritchard found it hard to work together on complex concepts. Traditional note-taking tools and text documents were too flat.

Why were contemporary electronic documents wedded to a linear idea of thinking and writing that dates back hundreds of years?

The collaborative aspect of Google Docs was great, they thought. But they wanted something visual.

They wanted a mind mapper that tracked ideas in a way similar to how the brain works. Something simple, expandable, and pleasant to use.

When they started building Coggle, they knew there was serious competition. The collaborative document game had many players.

But other apps were either free and not collaborative, or collaborative but not free. There was a game opening for making a product that ticked both boxes.

Apart from that, and most significantly, none of their competitors had broken free of the linear model of information.

So they concentrated on building a non-linear, unconventional tool. One that would be understandable through good design.

It would have an intuitive and simple user interface. It would be fun to look at and fiddle with too.

The branching design of the Coggle offers a way of tracking possibilities and contingencies. If this happens, then that happens.

You can organize subtopics and the subtopics of subtopics in a highly visible way. This lets you intuitively see hierarchy. It reminds one of a tree’s gnarled branches reaching out, or the central nervous system.

The beating heart of a mind map is its subject, sitting front and center. The simple design is what contributes to helping the user stay focused.

Thoughts are structured organically around a central item. Build and join branches and make complex things easier to understand.

Many organizations use Coggle to focus on ideas. They also use it to improve collaboration between employees.

Coggle users can take advantage of real time collaboration and share mind maps with as many colleagues as they like. Several users can add or edit branches on the same diagram simultaneously. And the application automatically saves every change made.

Coggle accepts all types of information. This includes unlimited image uploads, links to files in Google Drive, text labels, and math formulas. Coggle supports markdown as well, so it's easy to add titles, links, and formatting to text.

In 2018, the Coggle team released their most significant update ever to the application, the flowchart feature.

Also called a "process diagram," a flowchart is a way of illustrating the steps necessary to complete a task.

Previous versions of Coggle were not as able to illustrate linear workflows over time. So the company introduced a new menu that allows users to set a flowchart shape to any item in a diagram. These flow charts are as simple, elegant, and collaborative as mind maps.

In both mind maps and flowcharts, the user applies short phrases and keywords to thoughts. You get ideas down quickly and thoughts flow freer.

Coggle’s new flowcharts make ideas easier to illustrate. They allow users to make diagrams that are powerful and flexible.

You can create multiple root items and joining branches together to form loops. There's also the option of making private diagrams.

And that’s not all! The stylish and user-friendly menu adapts to the performance of the user’s computer. A glass-effect background is supported on most browsers.

Coggle offers tons of other cool features, including the Public Mind Map Gallery. This is a selection of the best public diagrams and mind maps made with the application.

The Coggle gallery allows users to search a mind map on pretty much any topic one’s heart desires.

You can discover the intricacies of such topics as biorhythms, leaves, or perceiving and presenting the self. You no longer have to talk to a scientist, botanist, or psychiatrist (respectively).

If only there had been a public mind map on magnets available when Insane Clown Posse asked the question, "magnets, how do they work?

Built for the knowledge thirsty

Coggle has had a strong reception among the education community. Many teachers who use it with their students praise its low learning curve and ease of use.

Last spring, students from the Health Club at Tarrant County College worked for over four months to create a giant Coggle mind map. It was for their Anatomy and Physiology course.

They presented the mind map as a 15 by 8 feet diagram at the national Human Anatomy and Physiology Society conference. There it attracted much attention.

The students claimed the creation process helped them to get significant knowledge. It also helped them memorize new concepts. 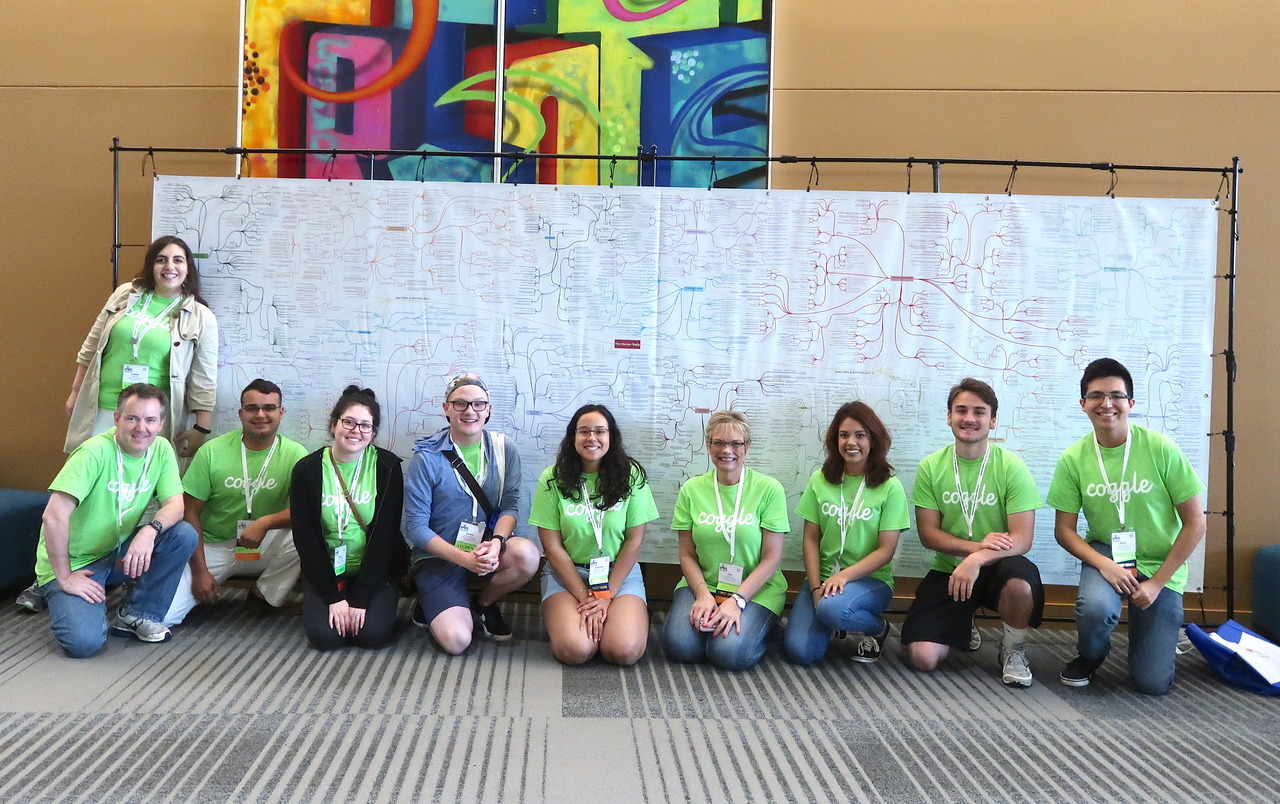 Coggle is considered one of the most user-friendly mind-mapping solutions. It holds court among similar apps like Mindmeister, Bloomfire, Wisemapping, and Bubbl.us. It's used by over one million people across many industries to share and understand complex information.

And once again, it's free. Go to Coggle.it and check out the free version.

It works as an online tool and has unlimited public diagrams. You can sign on from your Google account in seconds.

There are Android and iPhone mobile apps too. For more advanced features, you can upgrade to the Awesome and Professional paid plans.