Toiling away in secret, an Australian guy named Ethan set out to de-clutter his inbox, once and for all. The result is KanbanMail, a kanban board you can add to your arsenal of email hacks.

He released it in beta and within less than 24 hours it got posted on Hacker News. Then one day he woke up and found he was #1 on Hacker News. A legit true overnight success story.

His project seemed to have hit the bullseye of the zeitgeist, but how? 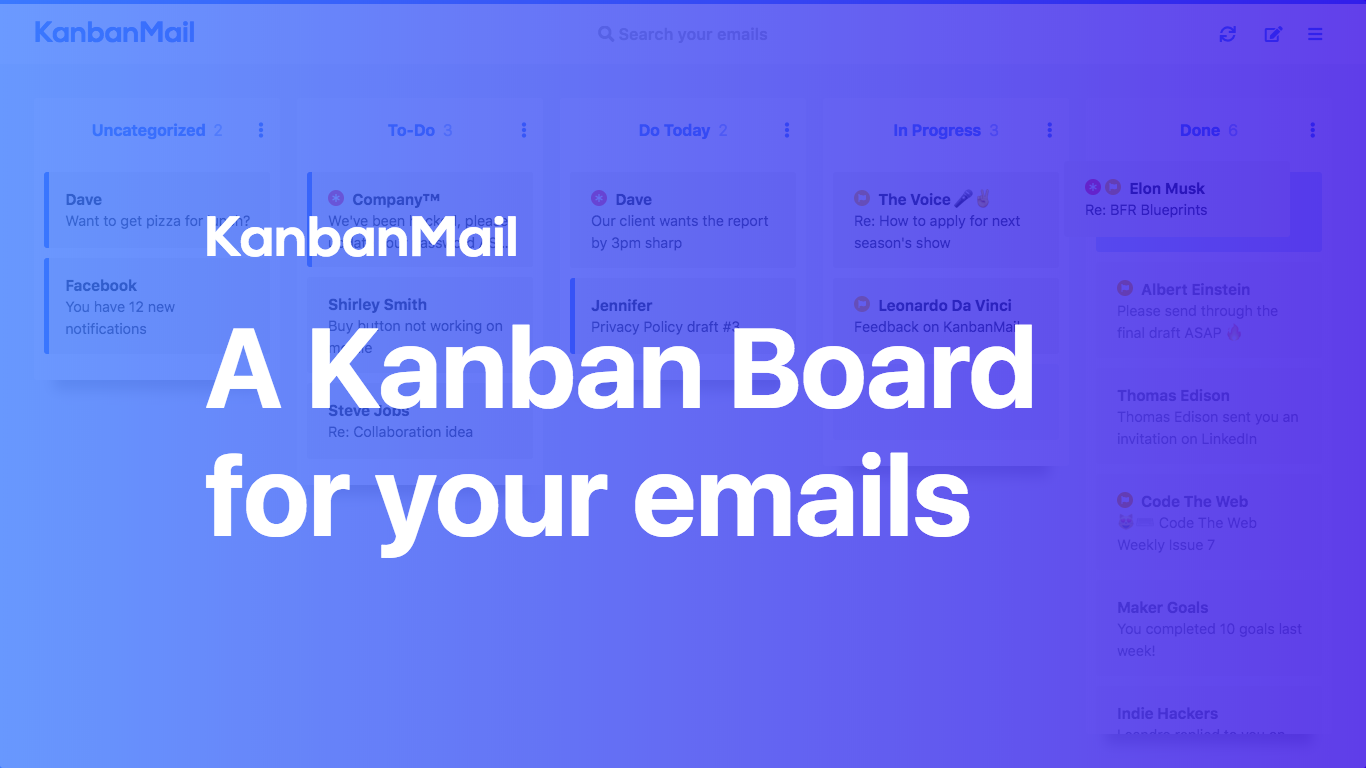 Email hacks for the rest of us

The kanban board is a method of organizing tasks visually. It was developed in post-war Japan, by an engineer at Toyota named Taiichi Ohno. Toyota’s ‘Just-In-Time’ production strategy, based on a visual scheduling board, was designed to prevent re-work and confusion by simplifying flow of work. The point was to stop starting, and start finishing.

The basic idea was actually nicked from supermarkets, whose inventory systems are designed for continuous delivery, and re-stocking products without over-buying.

These days, as startups emphasize lean-ness and agile software development, the board is big. There’s plenty of visual project management platforms of the type, like Trello and Asana. KanbanMail, however, presents the first time the system is available for your email.

That’s important because we spend about 13 hours a week and 650 hours a year doing email stuff. We would prefer not to.

As we seek email hacks to cut down inbox time, Ethan's app enters the fray by providing a simple real time scheduling solution with Gmail, Outlook, and Hotmail integration.

A Man, a plan, a visual kanban 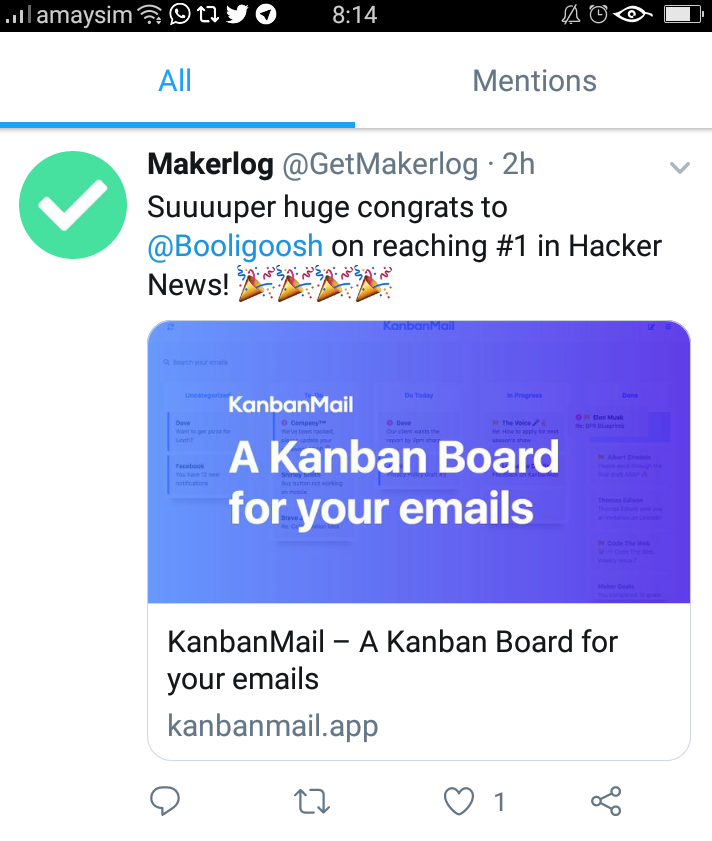 Ethan’s road to building this app is an interesting one. His first indie development project was Code the Web, an educational coding resource he started in 2017. That same year, he discovered KanbanFlow, a lean project management tool he started using all the time.

You see where this is going, don’t you?

He loved the scheduling system, and wanted to use it for email, but no tool existed. So he began to build it himself. Problem was, he didn’t know much about application protocol interface (API).

So Ethan mocked up what he wanted to see in Photoshop and self-taught himself what he needed to know to build the app. Eventually, after finding Vue and combining it with JavaScript, Ethan completed a beta. The whole time, he bounced ideas off other makers and used their feedback to make changes.

Then, one day in July, his app landed on Hacker News and blew up.

As the project was still in early beta, with a single creator, this newfound fame presented some logistical challenges. Ethan had to manually process and keep track of new users and had no payment system in place.

He quickly settled on using Stripe to deal with money, which saved him a lot of headaches. Then he figured out how to automate the access process, and he was off and running.

How the visual scheduling system works 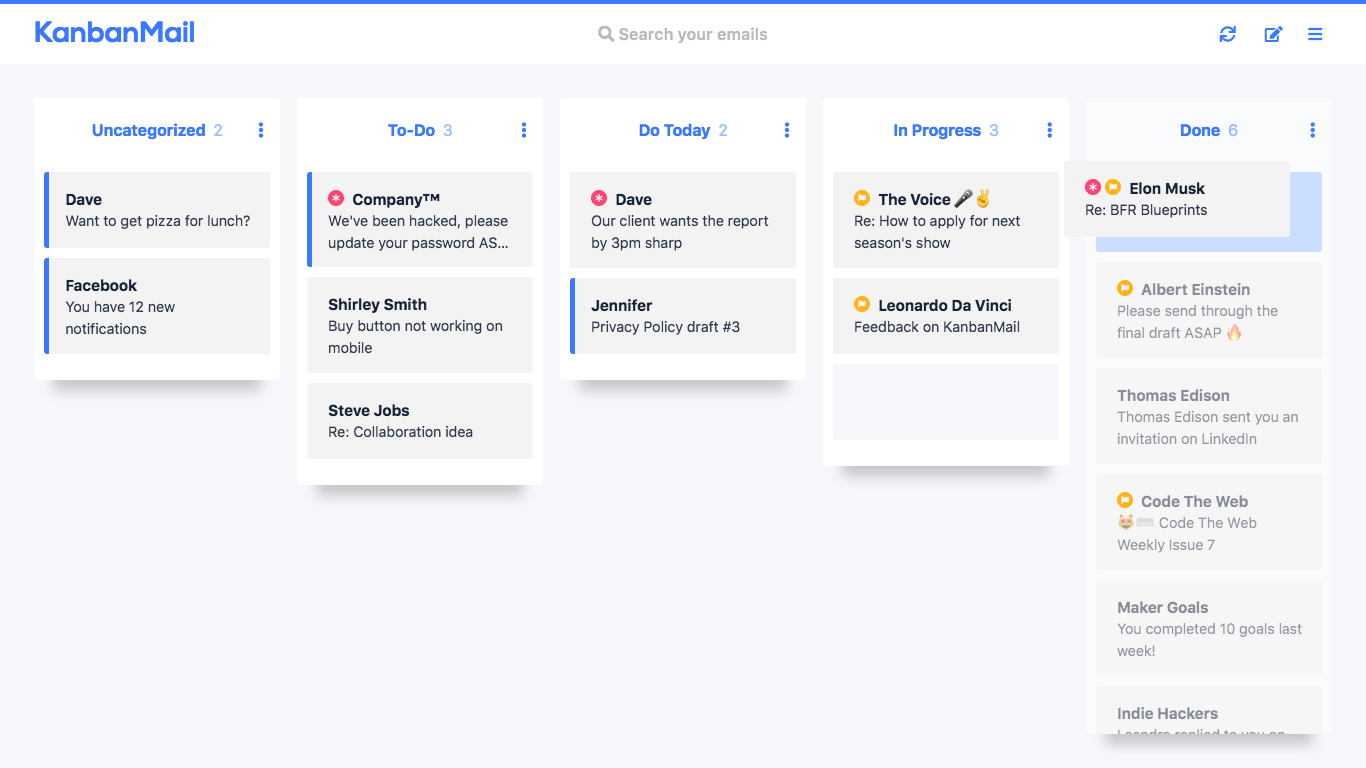 In the app, the workflow moves from left to right, as usual for this system. Emails begin on the left side in the “Uncategorized” column. Then you drop them in the “To-Do” or “Do Today” columns next door, assuming it’s something you actually want or need to do. When you start working on it, move it to “In Progress”. When it’s done, slide it over to “Done” on the right-hand side.

The app doesn’t delete, store, or move any assets on its email server. Everything is handled over https, which means information stays secure and there are no security loopholes from your email provider.

Et voilà, so simple yet so satisfying. Not to mention effective.

Is it for you?

It bears repeating that this tool was created by one guy, with no funding. As far as startup success stories go, it’s pretty nuts.

But as good as Ethan’s plucky story is, there are alternatives. One is Streak, a CRM for your email that lets you manage leads and projects, built out of Gmail for maximum compatibility in G Suite.

Nonetheless, if you’re a fan of the kanban, you’re going to want to go with Ethan. So far, he’s the only game in town, and his game is pretty strong.